Israel is about the size of New Jersey, but there was still so much to see. After our first day exploring the Old City in Jerusalem, we spent the next two days exploring the West Bank.

The best way to describe the Israel/Palestine relationship is “it’s complicated.” Our guide said it’s “like two different worlds across the street from each other,” describing East and West Jerusalem. I thought the same about the West Bank; Israelis and Palestinians live just a few minutes away from each other, yet they have different cultures and languages. Most Israeli Jews haven’t actually been to the Palestinian territories, and vice versa.

I wasn’t sure what to expect going to the West Bank. All you really see in mainstream media is violence and poverty, so it was refreshing to go in and see a different side of the area. We first stopped in Ramallah and met with Dr. Khalil Shekaki, who is the Director of the Palestinian Center for Policy and Research. He was able to provide us with concrete data on Palestinian beliefs and attitudes. This was especially important because there are so many stereotypes and misconceptions about the Middle East, and the research helps us see the diversity within the Palestinian population.

A warning sign at the “border” between Israel and the West Bank (controlled by the Palestinian Authority) #Israeli citizens forbidden pic.twitter.com/FEMkYcrLzT

Dr. Shekaki said that slightly less than 50% of Palestinians support a two state solution, but there are also a growing number of people supporting a one state solution. I learned that a few different factors affect how Palestinians view the viability of peace. 1. The practicality of it – what are the physical realities of the land and borders. 2. The perception of Israel – whether Israel’s long term aspirations are a threat to Palestinian existence. 3. Trust.  Dr. Shekaki said that the worst finding from all his research was that only 10-15% of Palestinians trust Israelis.

We also spoke to Elias Zananiri, on the Palestinian Liberation Organization (PLO) committee for Israeli interaction. “Both sides are sick and tired of this conflict,” Zananiri said. We spoke a bit about the status of Jerusalem; Zananiri said that Israel got its aspirations realized with the movement of the US embassy, but that Palestinian aspirations are “still pending.”

“Does the world expect us to live for 50 years more under occupation?” Zananiri asked.

A local market in what Palestinians consider Palestine, and Israel considers the West Bank. #NewhouseInIsrael pic.twitter.com/rjEWMBuQJl 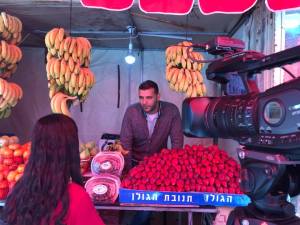 While it’s easy to get political and academic when talking about topics like the peace process, it was nice to get out in Ramallah and meet real people, the ones behind the numbers and data. I met a fruit vendor who studied journalism while in university. Even though there weren’t many job opportunities for him in Ramallah, he still said he would continue living there, saying “it’s my home.”

Our next stop was Rawabi. The city’s name means “hills” in Arabic, and it’s the first planned Palestinian city. Currently there are about 5,000 people living here. It was founded by Bashar Masri, and partly funded by Qatar. Masri said the project is about Palestinian self-sufficiency and economic independence once the conflict is over. Here’s an article if you’re interested in reading more about Rawabi.

Later in the day, we visited a Jewish settlement called Halamish, where a woman talked to us about what it’s like living on an Israeli settlement in the West Bank. There –  is so much controversy over Jewish settlements, even the diction is complicated – for example, saying settlement vs, neighborhood, or wall vs. fence. Again, the settlement was an example of how close Israelis and Palestinians can live near each other, yet not interact at all.

Although it was a busy day, we found time to check out the Mahne Yehuda Market, which is a popular spot for locals. A great time out, getting to know everyone in the group and our JPC coordinators. 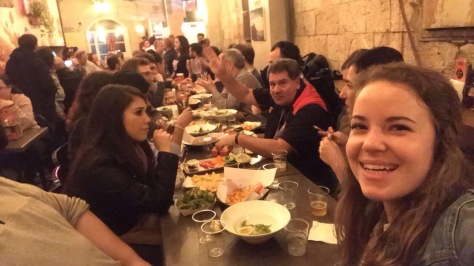