We drove a few hours north up to Tsfat, which is close to the Syrian border. We visited Ziv Medical Center, a university-affiliated, government funded hospital serving about 250,000 patients. They take pride in serving patients of many different ethnicities, and having staff members of many different ethnicities. One of their biggest accomplishments is caring for Syrian patients injured in the war.

The Newhouse gang outside Ziv Medical Center in Tsfat.

Over 1 million people have been injured in the Syrian war, and Syrians have nowhere to go or be treated. About 70% of the medical community in Syria has fled the country, according to Yarden Izak, the Public Relations and Marketing Coordinator at Ziv Medical Center. This is also why the work at Ziv is so important. Despite the political ramifications of the Syrian war, Izak emphasized the importance of not being political – and just being there to help another human being.

“Medicine has no borders.”

Besides treatment, Izak also talked to us about the negative perceptions many Syrians have about Israel. In schools and in society, they connect Israel with “the devil,” so coming to Israel and getting treatment influences – and sometimes changes – their preconceived notions.

Surprisingly, we learned that most Syrian patients want to go back, even with the violence and conflict raging on in their country. They miss their families, and want to be there with them. We met one patient who shared this story with us. He didn’t speak English, but our questions were translated from English to Hebrew to Arabic and then in that reverse order.

A Syrian refugee at the Ziv Medical Center in Northern Israel. He remains anonymous for safety reasons, and said he injured his leg in a bombing by Russian planes pic.twitter.com/LdN03aPVXS 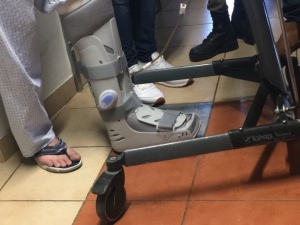 Abukaka was a patient in the orthopedic department. About 70% of the Syrian patients at Ziv Medical Center have orthopedic injuries.

Abukaka* (*fake name he gave us for privacy reasons) is waiting to be reunited with his wife and three-year-old daughter. He came to the hospital after being injured in a Russian air strike that hit his village. He walked about 35 kilometers using sticks as crutches to get to the Israel border, where Israeli soldiers then helped him get to the hospital.

Ironically, the doctor who treated him was Russian. “Russian people are not bad,” Abukaka said.

Being in the hospital for him is just a waiting game. He cannot use the internet, for privacy reasons. He cannot be visited by his family. We asked him what he does, and he laughed and said he is bored a lot.

Meeting Abukaka helped me see the human side of the Syrian war, and I am so grateful he shared his pain with us. We hear about all the awful things happening in Syria, but Abukaka was a real person we could connect with. Nearly 500,000 people have died in the civil war, which has been going for almost seven years. Abukaka said he has seen many deaths around him.

“If I catch him, I will kill him,” Abukaka said about Syrian president Bashar Hafez al-Assad Assad.

To make the conflict even more real, we visited Mount Bental. Here, we got views of the Golan Heights and the Syrian border. Our tour guide Nathan gave us a historical and political rundown of the Syrian war.

In the evening, we visited a Druze Village called Majdal Shams. This gave us an insight on the Druze community and real people currently living in the Golan Heights. The Golan Heights area is interesting because it used to belong to Syria but it was captured by Israel in the 1967 War. This creates some identity conflict for the people living here; many are undecided about their nationality, according to our hosts Majdi and Afeef, both young men in their mid-late 20s.

They told us that essentially, the Druze is a religious sect which separated from Islam; but overall it is a very different religion. They believe in reincarnation and are generally not permitted to covert to other religions. Majdi and Afeef told us that for them, religion and community are extremely tied together, almost being “the same thing.”

With regards to living so close to the Syrian border, they said it is “a little bit scary sometimes.” But that doesn’t stop them from living. “We have a good life.”

A typical Druze dinner, many other dishes not pictured.

This was another busy day, but we ended it by going to Metula. From here, we saw the Lebanese border. 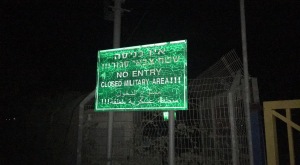 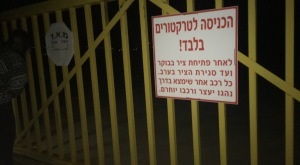