Our last day of the trip was bittersweet. We spent the morning packing up and reflecting on our trip. 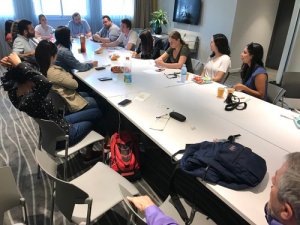 Seen on the way to Walla News.

Newhouse students looking both ways before crossing the street. 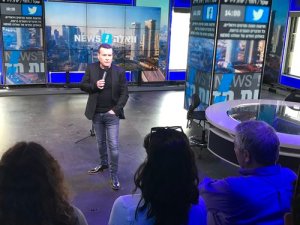 Walla News anchor Jacob Eilon speaking to us about the current state of journalism in Israel. (Photo credit: Simon Perez).

We ended our official itinerary with a trip to Walla! News. Here we spoke to Jacob Eilon, a well-known anchor and editor.

Eilon said reporting in Israel is “getting harder and harder.” The same could be said in the U.S., where President Trump is constantly attacking news outlets for being “fake news.” In fact, Israeli PM Benjamin Netanyahu has also made a similar statement about Israeli media.

This was an especially interesting visit because Walla! News is owned by telecom giant Bezeq, which is currently involved in Case 4000. Essentially, there are allegations that Prime Minister Benjamin Netanyahu exchanged political benefits for favorable coverage on Walla! News. 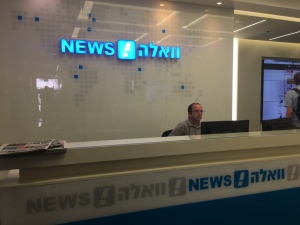 “He knows how to play the media,” Eilon said about Netanyahu. Netanyahu is known for not really giving interviews and generally not answering any media questions.

On the rooftop of Walla News on our final day in Tel Aviv. (Photo credit: Simon Perez). 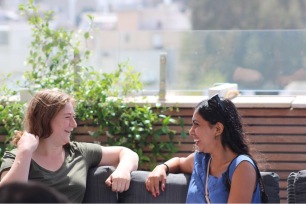 Odeya and I having a friendly conversation on the rooftop of Walla News. (Photo credit: JR Pierce). 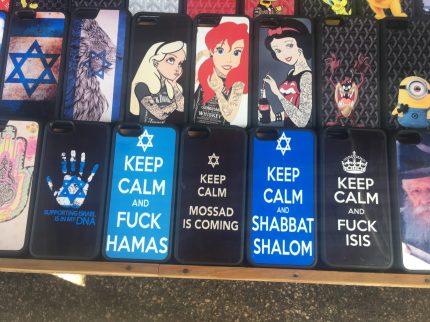 Seen at a market in Tel Aviv.

Seen at a market in Tel Aviv.

We ended our trip with free time in Tel Aviv. Some of us relaxed at the beach (Prof. Kaplan, for example), while a few of us went out to do more work for our individual news stories.

I went to the American embassy in Tel Aviv to get footage and film a standup. And my classmates Michael and Lileana also went out to work on their stories: Michael is reporting about the Bedouin community, while Lileana is working on a story about safety and security for journalists in Israel.

Hi @ProfHB… a reminder I will not be in class today. I’m in the Negev Desert spending the day with a Bedouin tribe, and Sheik Saeah Al-Tori pic.twitter.com/NcTItG9cIg

Follow me through the day! I’m shadowing reporters from i24 News. We are on our way to the West Bank for a 1 pm and 2 pm live hit. pic.twitter.com/wA0v6ZOZza

Today i24 News is live in the West Bank doing live hits. Whether in Israel or America, live hits from the field are the same: 5 minutes of the rush to get it done, then an hour of waiting for the next one while you make calls to update your story. #newhouseinisrael